Metso Outotec: digital wallboards to “align” all of its production

From sales to shipments, via machining and assembly: by involving all of its teams in the improvement of animation rituals (SIM), the Metso Outotec factory in Mâcon has considerably streamlined the visibility of information, and therefore decision-making.

The Metso Outotec factory in Mâcon has existed since the mid-19th century, it is still running at full speed, and is one of the flagships of the Finnish group Metso Outotec (17,000 employees, present on 5 continents).

The company’s head office in France, a commercial bridgehead for southern Europe and North Africa, the site employs 360 people (including 120 in production), and markets 350 shredders and 100 screens: small series of (very) large machines (25 to 50 tonnes) that mine and quarry operators use to crush, sort and process the materials they extract.

Made in Mâcon, these machines are in service all over the world: only 7% of volumes are shipped to France, 50% to “extended” Europe (including Russia and Turkey).

The ingredients of this success? A “premium” positioning, “both in the quality of our products and in the reliability and responsiveness of our services, explains Cyril Varraux, who has been managing the Mâcon plant for 3 years. We are fortunate to inherit a reputation carefully preserved for 125 years: what matters to us is to continue to stand out in providing solutions to our customers”.

TO LEARN MORE > Short Interval Management (SIM): a key issue for the industry

SIMs: the key to “synchronizing” all stakeholders

When he arrived at the head of the plant in 2019, Cyril Varraux immediately wanted to set up short-interval management meetings (AIC). A brief update that takes plant management to the field every morning, from sector to sector, to take stock of the issues and potential difficulties of the day.

Healthy, constructive, empowering: the many benefits of AICs

Why did you automatically put the emphasis on SIMs? It is the very philosophy of these meetings that interested Cyril Varraux: “when we work in a traditional way, the meetings are devoted to what happened the day before, what we could or should have done. In a SIM we focus on the current problems, and on the way in which we commit to solving them: the team leaders obtain the answer, or a commitment to answer, to their problem of the moment in real time”.

In addition to being constructive (and healthier…), SIMs help create a real culture of transparency, information exchange, and put all teams on the same wavelength. “The objective is that: to create the conditions for optimal cooperation,” continues Cyril Varraux. Between all the players in the production chain, of course, but also upstream and downstream: sales, supplies, shipments… must see the factory part as a help, and no longer someone against whom we fight for get information and deadlines…”

From paper to real-time information between sectors

To function well, these SIMs are organized in a dedicated space, where you can see all the indicators necessary for rapid decision-making. At Metso, we first proceeded with “paper” panels and Velleda boards. But very quickly, the need to change was felt.

The main problem? In the sharing of information between two areas of the plant. To update its SIM panels, each team referred to the weekly schedule integrated into the plant’s ERP. “The concern, explains Cyril Varraux, is that in the event of hazards occurring during machining, for example, the assembly was not informed, and therefore followed its schedule without being able to anticipate that they were going to miss the rooms”.

To make the right decisions based on current information, everyone’s schedule had to be shared and updated in real time. So digitized.

TO READ > Digital SIM board for effective team management

Pingflow: the right solution in an industrial context

At this stage, Cyril Varraux’s need seemed quite clear to him: a business intelligence (BI) solution would allow him to collect data related to the factory’s production, and format it to make the right decisions.

Concern ? “There are a lot of BI solutions out there. But most of the time, they are designed for the office, usable by someone who spends their day in front of a computer: solutions usable in a workshop context, on the other hand, they are not commonplace…”

When he discovers Pingflow, his conviction is made: this is what Cyril Varraux was looking for. Our digital visual management solution:

“Ultimately, what seduced me was that Pingflow is a startup, flexible and attentive to our needs, and which has been very proactive in helping us shape our ideas, concludes Cyril Varraux. Too big an actor, software publisher or ESN, that would have rather scared us away…”

The implementation of SIMs at Metso: collaborative work

The choice of the right partner and the right solution was all the more crucial had a very specific plan in mind: above all not to impose these future digital SIM screens, but to co-design them with their future users. And get the teams to imagine the improvements to be made to the organization themselves.

“You must never lose sight of the context, reminds Cyril Varraux: in the factory, we are not necessarily comfortable with computer tools, we are even a little wary of them… Impossible for me to arrive with a beautiful animation panel and imposing it on employees, that wouldn’t take!”

Conversely, the factory manager chose to move forward with the Kaizen method, in small steps: first the exact tracing of the “paper” SIM panels, then additions or clarifications of information to the operator demand. First on a workshop, then 2… until having deployed the panels on the 7 zones of the factory in mid-2022.

To involve the operators, it was necessary to show them that the new tool implemented with Pingflow would not be a constraint, but on the contrary a help, designed to respond to their problems.

To achieve this, the animation of a project of this type is essential. At Metso Outotec, Cyril Varraux has made a point of respecting a few main principles:

Assessment of this method used at Metso? “After a while, people spontaneously came to us saying: ‘I need this information for my next AICs, can you find a way to make it available to me? There, we knew that it was won”.

But if on paper it seems very simple, in fact the success of this project will have been based on 2 key prerequisites, according to Cyril Varraux: 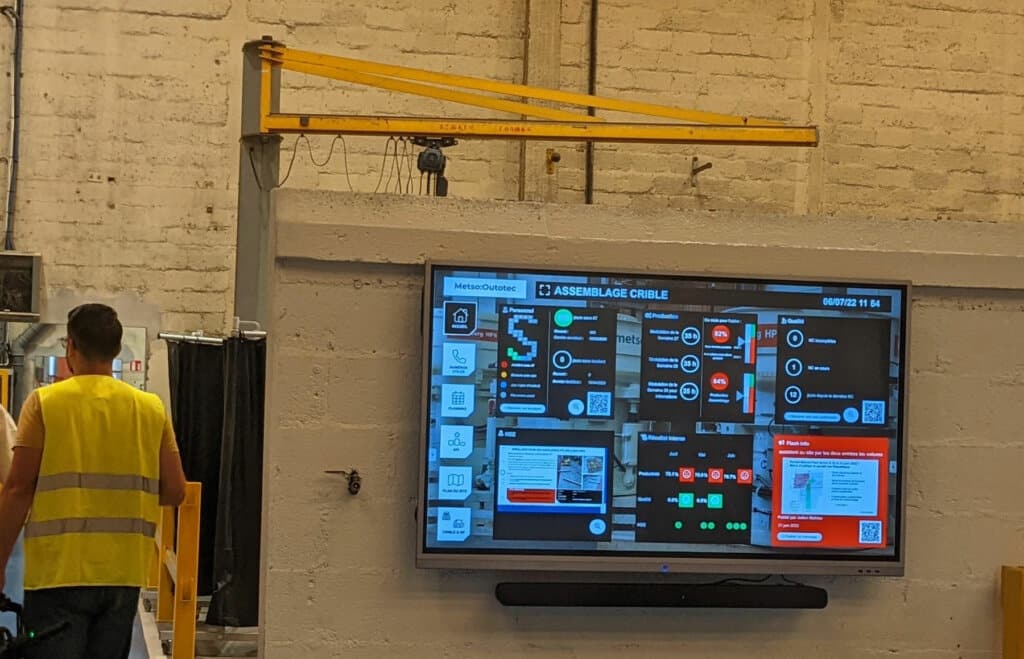 A tool that promotes continuous improvement

The flexibility of the Pingview solution is what makes it very easy to design 1, 2, 3… dozens of versions of SIM panels at Metso Outotec. But it is especially interesting insofar as these versions make it possible to always improve:

A project that spreads

In parallel with the SIM panels deployed in the plant, Metso Outotec wanted to develop a second type of screen to make the link between:

The expected benefits of this new system, connected to the one in force in the factory?

For this second project, Metso Outotec opted for a more traditional management, with specifications to follow for the Pingflow teams, and the delivery of turnkey screens.

Since the spring of 2022, the SIMs at Metso Outotec have been stabilized (without being fixed, since the idea is precisely to be able to integrate the information requested by the teams). And since mid-2022, the entire production chain has been covered. For what concrete benefits?

In the case of short-interval events, it makes sense: their digitalization makes these meetings more efficient. With up-to-date, centralized and shared information, decisions are made without gray areas, and with the right “entrants”.
But the positive effects of the project are not limited to this first observation. “Working on the content of our panels has allowed us to freeze the SIM routine, explains Cyril Varraux. It is the very design of the table that frames the meeting: an update on the HSE (health, safety and environment) indicators, the state of the presences and absences of the operators and the load of the workshop, advances/delays and problems of the day…: this corresponds to the order of the panel screens”. A process to which a passage on quality and non-conformities will soon be added: no more vague agendas, in a few minutes the essential points are discussed and processed.

No more issues in communication

Second positive lesson of the project: the screens have put an end to the endless exchanges of informal information (most often in an email on which it is very difficult to put your hand back when you need it…).
“This email is now an indicator in the table, which we will find very simply … and which we no longer even need to ask”, welcomes Cyril Varraux.
Production is now fully transparent to other Metso Outotec departments and even to the outside world. Where we could give an answer in about 48 hours to a customer on the progress of his machine, the answer became immediate and reliable.

Less tangible gain, but nevertheless very real: well-being at work, which in Mâcon is carefully monitored and measured, improves from survey to survey.
Difficult to attribute it to AICs alone? Cyril Varraux is nevertheless convinced that they contribute to it, by coming to minimize the conflicts born of misunderstandings.

Finally, even if the system designed with Pingflow is not directly designed to control production (as is the objective with other customers such as Chantiers de l’Atlantique or TIAG Industries), the digitization of AICs has and indeed an impact on the responsiveness and productivity of the factory.

Through the SIM panels, Metso Outotec Mâcon can follow a kind of production workflow:

“This workflow allows us very concretely to act on an extremely important indicator: the crossing time, i.e. the time between order taking and delivery, deciphers Cyril Varraux”. In Mâcon, it is on average 45 days… but for certain very specific products it can be reduced to 48 hours!

How ? Thanks to a lot of analysis work on the “invariants” of the machines (which can therefore be mass-produced), and a differentiation delayed at the last moment according to customer needs.

“It was a service that we were already able to offer our customers before, but Pingflow makes it considerably easier for us: every morning, we know precisely how many pre-assembled machines are available, and therefore can tell customers if production in 48 hours is possible, under what conditions…”

Progress already in the pipeline

Encouraged by this initial assessment, the Metso Outotec teams in Mâcon are already working on the next step:

We can see it: at Metso Outotec, continuous improvement is not an empty word! 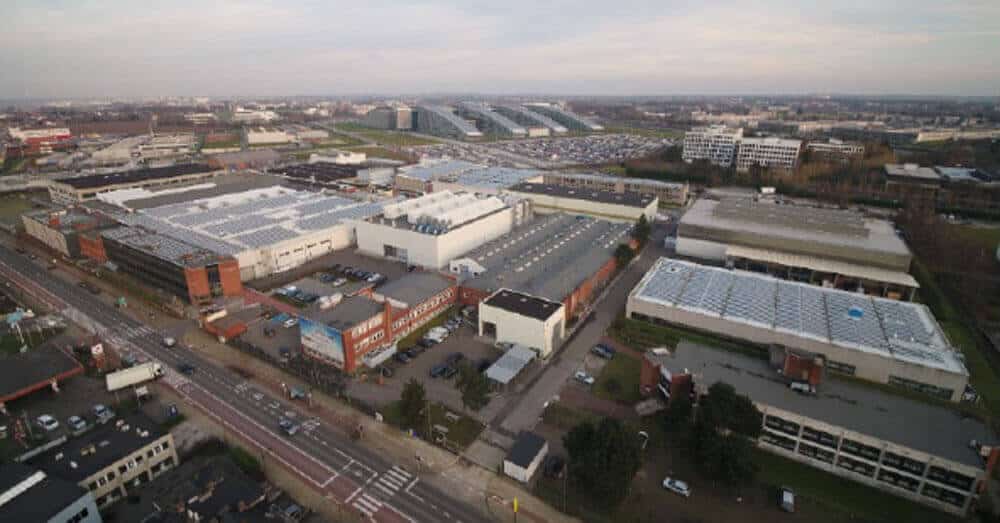 How Sabca uses the digital flowboard to monitor its production ?

By switching from a paper flowboard to a digital flowboard, the Sabca Brussels plant has considerably streamlined the production monitoring of parts intended for the Airbus (…)

Andon system:
How has CLAAS digitized incident management on its assembly line?
Pingflow led the design and installation of a digital Andon system at Le Mans plant of (…)

All articles from Juanita