How Sabca uses the digital flowboard to monitor its production ?

By switching from a paper flowboard to a digital flowboard, the Sabca Brussels plant has considerably streamlined the production monitoring of parts intended for the Airbus A350 program. All in record deployment time.

For a century, Sabca (Société Anonyme Belge de Constructions Aéronautiques) has established itself as one of the most important suppliers of equipment for aeronautics in the world, with 4 main markets: defence, space, industry and commercial aviation.

From drones to Arianespace launchers, the group employs a thousand people in 4 factories (3 in Belgium, one in Morocco), the largest – and the one that interests us here – being in Brussels.

Sabca Brussels: a major subcontractor of the A350 program

On this site in Brussels (which is also its head office), nearly 700 employees work in the 105,000 m2 factory to produce the cantilevers, “ribs” and levers, i.e. the parts used to operate the flaps. of the Airbus jumbo jet A350. High-precision work, which is part of the incredibly complex industrial ballet that is the assembly of an Airbus: safety, quality, costs and deadlines are not negotiable! 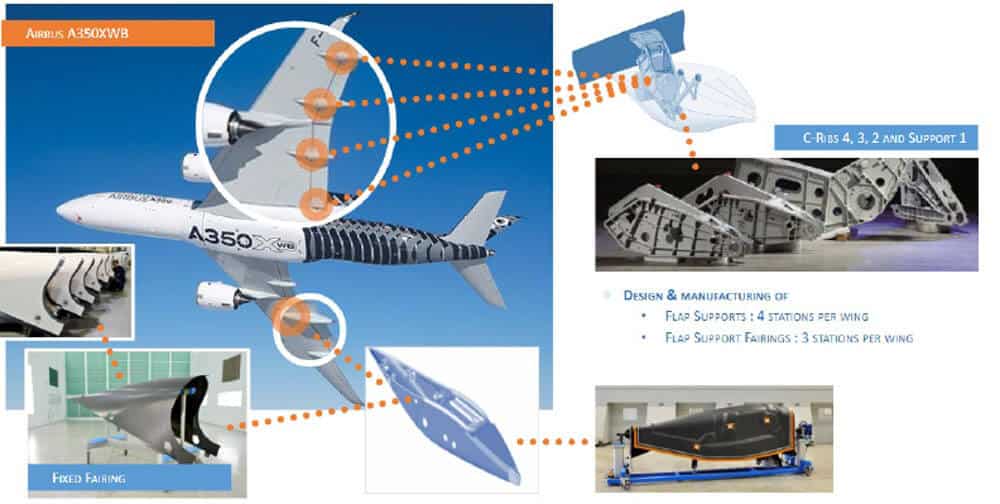 At a given moment, the production in progress on the 2 lines of the Sabca-Brussels plant is around 80 parts, i.e. the equipment of five A350s. The plant operates from Monday to Friday, from 6:30 a.m. to 10:30 p.m., in 2 “shifts” that must also be coordinated for the smooth running of operations. In short: precise monitoring of production is mandatory.

To read more: Operational management: Why opt for Visual Management?

The factory is of course equipped with an ERP, which makes it possible to obtain reliable information on the state of the parts and structures in production. “But an ERP does not give you a global view of the state of health of your line, underlines David Vermoesen, it is not its job”. It is also not designed to offer this visibility to all actors in the chain, and access to it is restricted.

To answer the question “where are we in the progress of the parts to be produced”, David Vermoesen, the program operations manager, therefore imagined a flowboard, with several levels of information:

First with a very simple process…on paper. A large synoptic spreadsheet schematizing the production lines, and locating the progress of each part during production, which each team leader would then “point” during the shift.

Simple ? But not very effective! “Do the math: import the ERP data into Excel, print the tables, have them filled out by the team leaders for each of the 80 parts in production (and this over 2 shifts) and then manually enter the information into the spreadsheet… We had it for 1 to 2 hours a day”, explains David Vermoesen. However, if there is a rare commodity in the industry, it is time!

Quickly, David Vermoesen set out to find a solution to automate the collection of field information.

What does he expect?

Monitoring of production progress in real time (instead of having a “photograph” per shift);

Luckily: for some time, a project to digitize SIM meetings (short interval animation) with Pingflow has been under consideration at Sabca. The potential partner to implement David Vermoesen’s idea is therefore found. There is no more !

The automated flowboard: gains at all links in the chain

The digital flowboard project will be deployed at speed… almost supersonic. Requested at the beginning of the summer of 2021, the Pingflow teams deliver an operational flowboard in September. “The Pingflow teams were ultra-reactive”, appreciates David Vermoesen. “But we were able to move forward all the faster as David’s expression of need was extremely well put together and advanced”, retorts Christophe Zanetto, project manager at Pingflow.

The contribution of Pingflow: challenging UX

Indeed, the expression of need was clear: based on his “manual” flowboard, David Vermoesen had already sketched out a first rendering of what he wanted. On this basis, the Pingflow teams offered it a more readable and more dynamic version with:

“It was not a clearly identified expectation on my part, and yet, this is where you realize the contribution of design and UX to an interface like this: Pingflow has really succeeded in making this flowboard much simpler and more efficient in the transmission of information”, emphasizes David Vermoesen.

The result: an agile and near real-time flowboard

With this rendering, which more clearly reproduces the state of production of the various parts, the new flowboard easily wins the support of operators and team leaders.

On the line dedicated to ribs (on which the new digital flowboard is initially deployed), a large screen allows all teams to follow production in near real time (information updated every 30 minutes), while sparing David Vermoesen and the leading teams the tedious check-in stage.

Because the main need was there, and the contract is fulfilled: team leaders now use the “live” flowboard as a production management tool, thus saving 1 to 2 hours per day on update time .

This real-time visibility offers a second benefit: it allows you to anticipate pointing or other problems on the parts, and also to save reaction time when they occur. More responsive, less time-consuming, more readable: the project is a success! And we are only at the beginning…

To learn more: How to put people at the heart of future manafacturing?

Flowboards, a new asset for Sabca

On the strength of this successful POC, David Vermoesen plans to continue in two directions:

Monitoring and reacting in real time to production incidents on a line is only one step. The challenge of the project is indeed to streamline all plant operations on the A350 program: in 2022, all lines dedicated to ribs and levers will therefore benefit from the same dashboard as the test line.

Then, no doubt from 2023, it will be the turn of other production units in the group to draw on the lessons learned from the project carried out with Pingflow to set up their own flowboards.

Another follow-up given to this project: exploit the data generated to feed the flowboard no longer in a dynamic and real-time perspective, but with a historical aim.

Each advance or delay in the production of a part, each time overrun on an operation… will serve to feed the reflection on the real pace of production. And therefore make it possible to adapt capacities upstream, to set up more efficient resource reallocation processes… Production monitoring represents a mine of information to achieve the final objective: operational excellence. 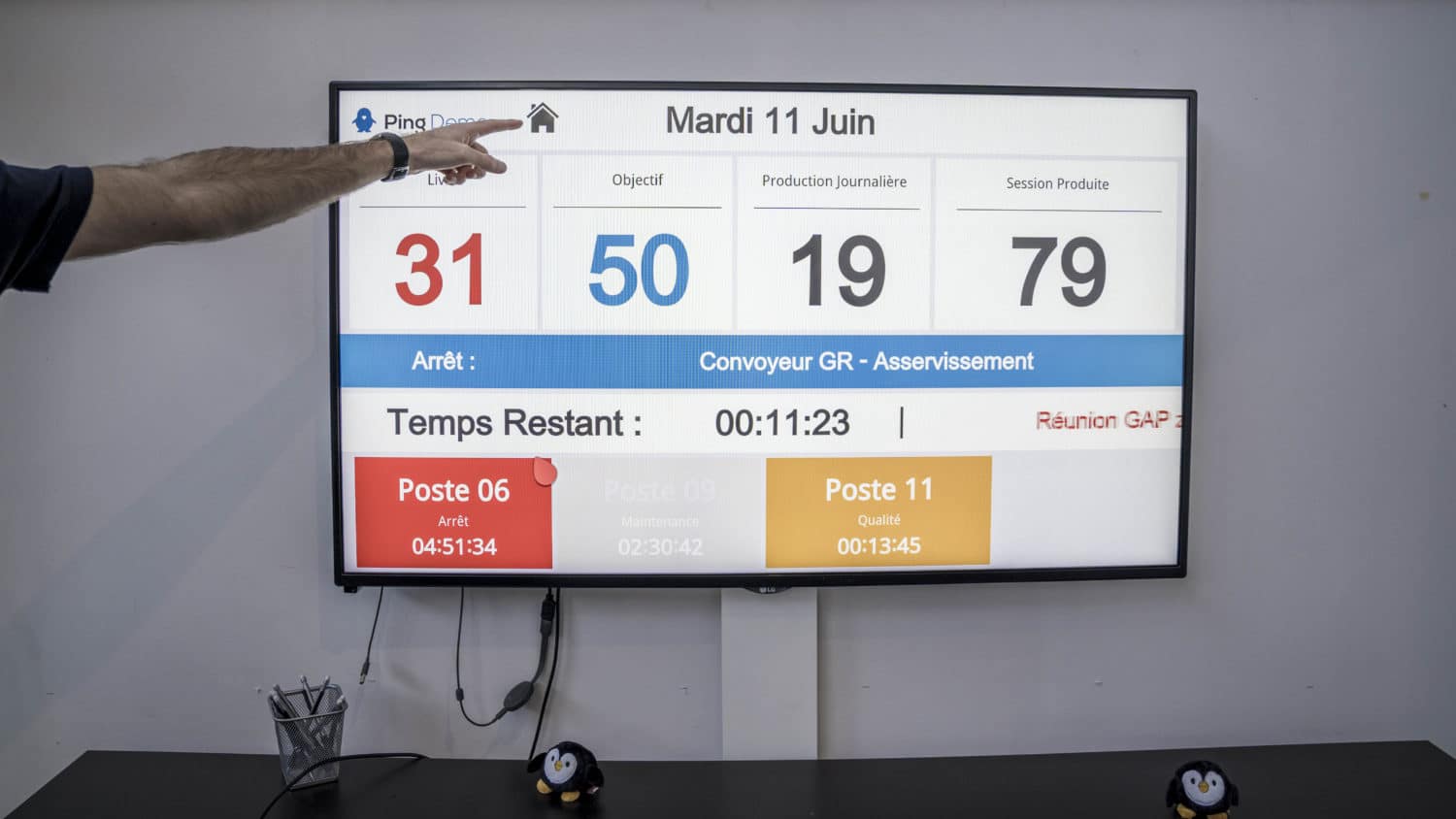 The GPS on a vehicle allow you to go from point A to point B and obtain all the information relating to your journey: steps, resources (…)

Andon system:
How has CLAAS digitized incident management on its assembly line?
Pingflow led the design and installation of a digital Andon system at Le Mans plant of (…)