From actual production to supplies, the Chantiers de l’Atlantique passenger liner cabin assembly unit has gained 15 productivity points in just a few years. Thanks to an andon alert and digital piloting project carried out at full speed.

Production lines active more than 90% of the time, a constantly decreasing takt-time, less overtime… and an ever more peaceful climate: at Chantiers de l’Atlantique, the results of the efforts made in terms of excellence operational are spectacular.

Why? A continuous improvement approach that has made it possible to anticipate hazards and resolve them (much) faster, throughout the production chain.

The Chantiers de l’Atlantique, cradle of the giants of the seas

Normandy, France, Queen Mary 2, Harmony of the Seas… It is in Saint-Nazaire, in the Chantiers de l’Atlantique workshops, that these famous giants of the seas were assembled. Since 1862, the company has become a reference in the construction of ocean liners, but also military ships and more recently offshore wind turbines. These are all markets in which demand is very strong, and where production is therefore constantly under pressure.

About ten kilometers from the main site, a smaller unit (26,000 square meters and 350 operators, all the same…) specializes in the prefabrication of cabins, which are then embarked and finished on board the liners.

In this workshop, 5 production lines, taktées et cadences, allow to assemble the various models of cabins (crew, standard, family, for people with reduced mobility…) and their sanitary blocks, at a rate of 2000 to 2500 cabins per ship on average. Each liner occupies this production unit for a period of 4 to 6 months.

On the lines, lean objective!

“The first observation that we can make, explains Aurélien Caillaud, is that our lines have no work in progress: we are constantly in pull mode. Consequence: the slightest hazard on one of the 20 workstations on each line will cause a stoppage, and block the 70 operators who work there”.

To resolve a hazard as soon as it arises, the Chantiers de l’Atlantique have set up teams:

But on its own, this organization is not enough. For several years, Aurélien Caillaud, lean engineer at the Chantiers de l’Atlantique, and his predecessor François Robic before him, have therefore asked Pingflow to put in place tools to effectively adopt methods from lean management (Andon and Yo- I-Don) to manage and optimize cabin assembly lines. Goals ?

A project carried out in 2 phases: first on the production lines, then on the logistics supply.

As part of a pull-flow production, there are always hazards: before starting its collaboration with Pingflow, the cabin workshop suffered an average downtime of one hour per day.

Added to these incidents was the problem of line changes (a new type of cabin that was entering production). Between two “batches”, the time for stopping and restarting the line was also one hour. Taken end to end, these delays could have a strong impact on the production rate, and therefore the delivery of the liner at the end of the chain.

With the help of Pingflow, each workstation has been equipped with a tablet that allows the operator to retrieve information such as:

These incidents are immediately transmitted by SMS and email to the team leaders, and displayed on large monitors located at strategic locations in the workshop to disseminate real-time information on the state of the activity. The interventions and reinforcements needed to resolve the incident and restart production arrive more quickly, and all line activity is monitored more closely.

In the back office, the whole system is connected to the ERP in order to provide the provisional production “film” of the day and to a web interface which allows: 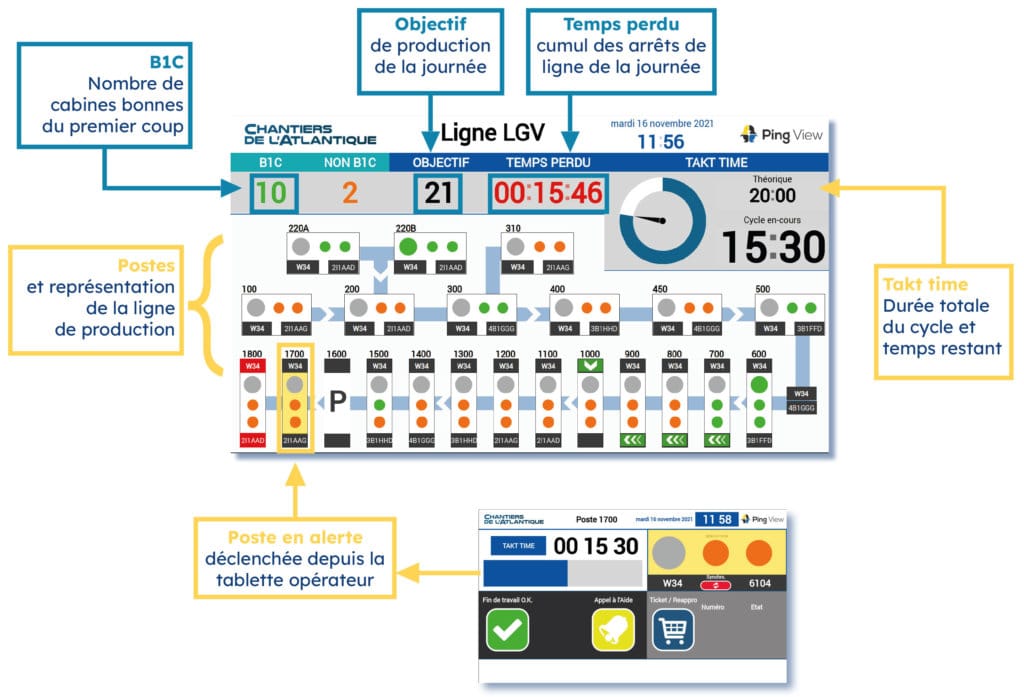 Deployed in 2019, this first andon “brick” has enabled the cabin workshop to record more than convincing results:

Bet won? Except that the Chantiers de l’Atlantique did not intend to stop there…

2021: a step further with logistics andon

Because after having streamlined the resolution of production incidents, the teams realized that 80% of residual line stoppages were linked to non-compliant parts: damaged sanitary block elements, degraded parts, etc.

Historically, an operator confronted with a defective part had to fill in a non-compliance form by hand, and send it to the teams of rapid replenishers so that they could pick up the spare part in stock, send it to the station in question. , and close this “ticket”. A cumbersome, time-consuming process… and therefore eminently optimizable!

Especially since it generated strong tensions between the production and logistics teams, “who passed the buck during this type of incident, observes Aurélien Caillaud. However, one of the non-quantifiable but very real benefits of setting up production andon with Pingflow was precisely a net gain in serenity in the workshop: the operators now know that the incident ‘they said is well identified and in the process of being resolved. We wanted our teams of replenishers, who are by nature subject to urgency and stress, to also benefit from calmer working conditions”

A new process co-designed with the teams concerned

To solve this problem, Aurélien Caillaud first listened to the “field”, and collected the irritants of the teams…

Not easy, especially in the context of these workshops:

It is thanks to this phase of listening to the field that Aurélien Caillaud was able to deploy with Pingflow a logistics andon system adapted to the needs of his internal “customers” from the three production, logistics and quality departments, of which he himself gives you the demonstration.

In the pipes: innovations that spread throughout the production chain

Committed to a process of continuous improvement, the Chantiers de l’Atlantique will now capitalize on the steps taken during the first 2 phases of the project, to push the management of the activity even further, with:

The key success factors of the Chantiers de l’Atlantique project

The remarkable results observed by the cabin assembly unit are neither miraculous nor the result of chance. But above all the consequence of a well-conducted project based on 3 key factors:

Data culture : Where and how to exploit useful data?

Data is a goldmine for companies: The collection, storage and use of data are indispensable for company performance. However, if some data
sources are more visible, others (…)